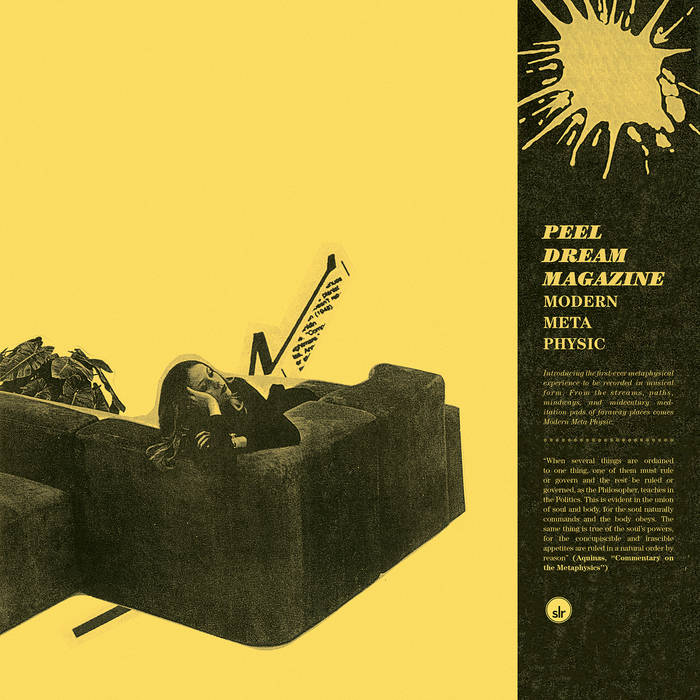 Zach There’s a warmth and conciseness in the songwriting that is unlike much else I’ve heard this year. A great record to put on if you’re in a pensive, throwback mood. Favorite track: Interiors.

"Modern Meta Physic" is the debut album of Peel Dream Magazine, the nom de plume of New York City-based musician Joe Stevens. Stevens, a talented multi-instrumentalist, wrote, played, recorded, and mixed the album in his apartment in Brooklyn — quite surprising, considering how much "Modern Meta Physic" sounds like it was played by a tour-seasoned band.

A nod to BBC Radio 1 legend John Peel, arbiter of all things underground, all things quality, and all things — it must be said — "cool," Peel Dream Magazine is highly evocative of a certain strain of independent music. As Stevens explains, “I wanted to conjure media . . . to create an outlet for subcultural wanderers. Something you can subscribe to."

Exhausted by what he thinks of as the manipulative aspects of contemporary pop music, Stevens harkens back to the early 1990s, when The Velvet Underground resurged as an inspiration to a new set of bands wielding synthesizers, off-set guitars, and a political bent. The Peel Dream experience is defined by a gentle, fuzzy psychedelia, largely indebted to London's onetime “Scene that Celebrates Itself." It’s a hypnotic bit of mod-ish lo-fi pop, recalling the best of early Stereolab, Lilys, and other shaggy haired kids with vintage fuzz pedals, slim trousers, and good record collections. Stevens conjures a distinctly 90s vision of the 60s. Not the actual 60s, mind you, but perhaps a 60s daydreamed about from the creature comforts of a suburban living room. An abstraction. Shag carpet turned to bowl cut. Jean jackets — disaffected but wholesome youth. It's not irony, exactly. It's the love that comes from loving. And a bit of whimsy. It's the 90s, again. Post-post.

Written and recorded over a four-week period in the fall of 2017, “Modern Meta Physic” fixates on the New Age universe of the Catskills region of New York. Stevens deals in generic bohemian fare — Far East philosophy, Native American tradition, mid-century modern cool — as he appraises the world according to privileged urban expats who increasingly call the upstate paradise home.

Not everything is tongue-in-cheek, however. Stevens also pays homage to Catskills as a place replete with natural wonder — a place of self-discovery and impromptu adventure. “I wanted to convey the Catskills the way that Brian Wilson conveyed Northern California on the post-Smile records. It’s a little trippy, a little childlike, but the feeling is real.” In "Living Room." Steven's surrenders to Mother Nature in a bit of dada-esque worship, transfixed by "sound, sight and weather.” On "Don’t Pick Up Slackers," Stevens settles into a woodland getaway home as he tries to make sense of his neighbor's "fruit diet.” One might get lost in the nostalgia of aimless road trips and cabin retreats, but there are moments where Stevens ventures on to new topics. On "Art Today," he opines on what he sees as the maddening and thankless task of committing oneself to making art. "Us for Chanel, all are to sell. I want to tell, some days are well."

Leading off the album, "Qi Velocity" is a metronomic take on French pop that yields to a lush, twee chorus reminiscent of Belle and Sebastian. "Deetjen's," named after the much-loved bed & breakfast in Big Sur, would fit snugly on Unrest's best Teen Beat material. The ambient "Levitating Between 2 Chords" suggests Oval in “94 Diskont" mode. There is an economy to these tracks — everything is distilled down to it’s essential elements, no gestures are wasted, no superfluous ornamentation taking up space. Where some might add effects, Stevens removes them, opting for surprisingly straight-forward arrangements of Farfisa, monosynth and guitar. "Due to Advances in Modern Tourism" displays a soft take on Neu!, while the organ that enters could be a sly wink to Steve Reich's "Four Organs" or even Terry Riley's West Coast take on minimalism. "Wood Paneling" is a lysergic trip, a memory of a memory of an experience not lived but learned — how can something feel so relaxing yet so … uneasy?

While Stevens is more than happy to show his influences on his sleeve — mind you, they're great influences — it's clear Peel Dream Magazine isn't just a "sound". The guy can write songs. And when he wants to hit a target, he hits it. Where he goes next is anybody's guess.

Slumberland began operations in 1989, inspired by such musical happenings as the UK post-punk indie label scene, lower east side noise bands and the DIY international pop underground. Since then we've covered a lot of territory, from punk to lofi noise to shoegaze and of course pop, releasing records from bands like The Aislers Set, Stereolab, Rocketship, Lorelei, The Ropers and Black Tambourine. ... more

Bandcamp Daily  your guide to the world of Bandcamp